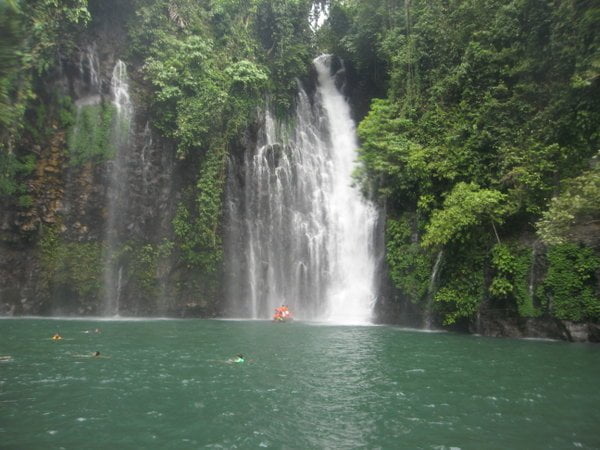 ILIGAN CITY – They call it “Land of the Majestic Waterfalls” and, rightly so, the Tourism department could not have coined a better title for one of Northern Mindanao’s growing cities blessed with more than 20 waterfalls. The locals here couldn’t agree more.The mere mention of “Iligan City” easily conjures up breath-taking vistas, like the Maria Cristina falls, the country’s highest. Although there are other great sights here which are perfect material for a Facebook status photo, it’s the waterfalls that give the city exclusive bragging rights in the Philippine’s highly-stacked inventory of natural wonders.

Somewhere in the hidden forest of this laidback city is a haven for weary souls desiring for that much-needed escape. Nestled in the sleepy barangay of Ditucalan in the town Buru-un around 12 kilometers from downtown is the fabled Tinago (hidden) Falls.

Tinago Falls is approximately 245-feet high, with ice-cold waters cascading gorgeously and creating a soft blanket of mist into a serene bluish-green lagoon about a hundred feet deep (which is a rough estimate by locals who have yet to come up with an exact figure on how deep the water really is).

When visiting a magnificent natural wonder like Tinago Falls make sure to bring along a waterproof camera or camcorder. At least, this is what I realized the moment we hit the lagoon and thought we needed a more interesting shot. A more “awesome” shot, that is.

While its beauty may remain etched in the visitor’s memory, there is nothing like capturing its allure on film or video so that when the urge to “revisit” Tinago’s grandeur strikes, the photos or videos will be there to help bring back those beautiful memories more lucidly.

A waterproof camera/camcorder will be very helpful, especially when taking close and detailed shots of the waterfall right on the bamboo raft or on top of rocks where you get a great view of the lagoon and the people frolicking about. Of course you can still get a clear shot of the waterfall from a distance and avoid getting wet, but then that would be half the thrill. A photo of you taken underwater is simply one of a kind. Prepare to get wet and wacky when in Tinago!

Just beneath the waterfall is a crevasse where visitors can snuggle into and behold the orchestra of rumbling waters all around. The lagoon is always at its most captivating that it is nearly impossible to not succumb to that instinctive urge to partake of its refreshing charm. For those built for the cold climate, swimming is a must-try.

A life jacket (rent fee: P20) is required before anyone can get into the water, aside from a P10 fee for entrance, which excludes fee for the bamboo raft “cruise” (P40) without which the whole Tinago Falls adventure becomes incomplete. This thrill-ride is the only way to get beneath the onrushing cascade (the left side, that is, not the thick white mass, as shown in the photo) and experience what it’s like to be pounded by the mighty Tinago.

Like thousands of hard pellets hitting your head (don’t even think about looking up!), the power of the waterfall couldn’t be more exhilarating for any adventurer’s adrenaline rush. A Tinago escapade will never make sense without this kind of “initiation”.

Tinago Falls is among the three most beautiful waterfalls in Iligan City alongside Maria Cristina Falls and Mimbalot Falls. These are three must-see destinations that put the city on top of the Philippine tourism map along with its other great natural landmarks.

Tinago, as its name implies, is tucked deep in a winding and narrow ravine that is shrouded by thick flora about a thousand feet below the surface. While other popular falls require treks of lung-busting ascent, the path that leads to this secluded Eden is a 500-step descent on a craftily-made spiral-y cemented staircase that makes the trail safer and more enjoyable, especially for those with weak knees.

Going back up is another story and this is what makes the entire trek challenging and fun. Imagine what the first ‘conquerors” had to contend with during Tinago’s “infancy”: Tourists had to literally crawl their way down through the wooded enclave to avoid sliding or falling and cling on to tree branches (and roots!) just to get there.

Again, the journey back up can be very intimidating but certainly worth every minute of it. Lots of fun here. Not to mention the diversity of flora and insect life at the heart of the rainforest. For instance, foot-long millipedes are common sights, especially on leaves and on the zig-zaggy concrete stairway to welcome eager guests.

Based on personal accounts by Tinago’s watchful inhabitants, underwater divers from other countries once tried to fathom the falls’ depths. It was said that after being forewarned of the mystery that surrounds the area, the divers who, understandably were detached from any ounce of superstitious inclination, still proceeded with their mission – until some of them failed to come back from the abyss.

Many locals up to this day claim that Tinago’s vast natural basin can never be fathomed. As enchanting as its name suggests, these people believe that supernatural beings they long regard as the true gatekeepers of this isolated sanctuary still inhabit the place and for a good reason.

It’s nearly impossible to brush aside the notion of otherworldly beings taking residence in the woods of Tinago, but then that’s how the place strikes you as soon as you get there.

The Legend of Tinago

According to folklore, there once lived a powerful ruler named Sultan Agok and his wife. The two were chosen by their tribe as king and queen, but they were overwhelmed by the power bestowed upon them and became selfish and cruel.

When Agok’s wife became pregnant, a sorceress disguised as a pauper, asked for their help but instead they rejected and banished her.

Because of their cruelty, the sorceress cursed the sultan and his wife that their child will be born ugly. But, the couple did not take this seriously and forever exiled the sorceress.

Soon after, the sultan’s wife gave birth and with the curse, the child did turn out to be ugly. This broke the hearts of the couple as the sultan had expected the child to look as beautiful as her mother.

The couple, to save themselves from embarrassment, decided that the best thing to do was to hide the child in a far-away cave. They named the child “Tin-ag”, which means “hidden face”.

Years went by and the child became old enough to emerge from the cave and was enthralled at what she saw. The sorceress saw her and made a proposition to transform her into something of wonder and great beauty.

The child accepted the offer and she became a waterfall. 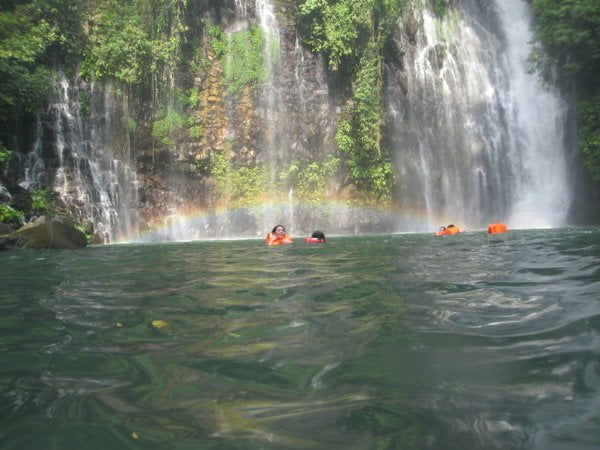 Nature has its own unique way of making you feel its mesmerizing aura right there and then and Tinago Falls is all this and more; it offers you that satisfying sense of completeness, of “being”, perhaps because it is your first time to set foot on the place, or maybe because you are just too overwhelmed by the serenity and freshness in the air that your urban abode could never pamper you with. It’s different here. There’s an abundance of peacefulness – in the surrounding foliage, in the water, and everyone around is wearing a happy smile.

Tinago Falls is a breath of fresh air to an otherwise saturated urban atmosphere that is almost literally a stone throw away. It is an oasis that beckons in a quiet nook, ever grateful to provide its guests the reassuring comfort and warmth this peaceful abode has been so famously known for.

The city government has made great strides to boost the image of Tinago Falls with aggressive tourism campaigns but it has been mostly first-hand experiences and accounts of visitors that were responsible for the influx of both local and foreign tourists that likewise enhanced the city’s coffers as a result.

How to Get There

You can hop on a habal-habal (motorcycle) for P30 to P60 (if you’re coming from Maria Cristina Falls), or take the jeepney back to Buru-un and tell the driver that you’re headed to Tinago Falls. From the main road, a habal-habal will take you to Tinago’s jump-off point (fare: P15-P25) and from there brace yourself for the half-hour trek down to the falls … and discover its hidden secrets…
—-

Jet Encila is a freelance writer and journalist. He loves to travel, cook and ride his mountainbike on weekends. 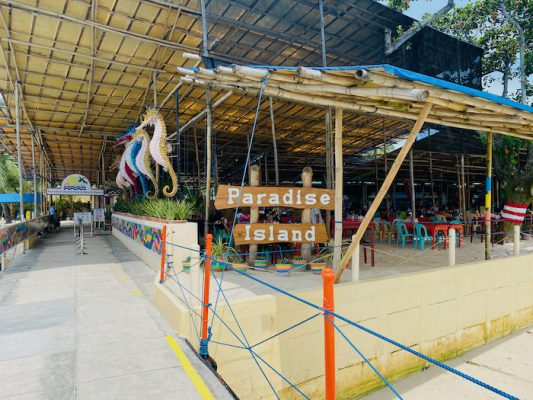 How to Get into Samal Island During the Pandemic 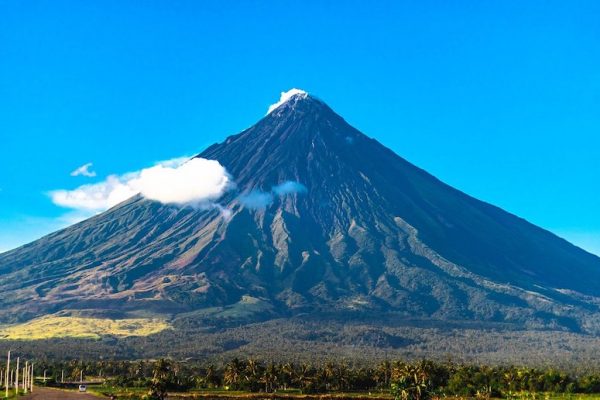 What are the Most Active Volcanoes in the Philippines?